Henry "Hank" Voight is a Chicago Police sergeant and the Commanding Officer of the Intelligence Unit in Chicago P.D..

It is common knowledge in the Chicago Police Department that Voight is a suspected dirty cop for being associated with shady, unsavory characters in the Chicago underworld, breaking police protocol and taking bribes. It comes out that Voight has now and then outright committed and covered up crimes. However, despite his ruthless, morally ambiguous methods, Voight is a veteran cop who is determined in getting the job done, is extremely dedicated to the victims of his cases, goes out of his way to protect and help vulnerable young people, and does have his fellow cops' and Chicago's best interests at heart. He is working with Internal Affairs using his dirty cop reputation as part of an operation to bring down high hitters in Chicago crime world.

In 2012, Voight's ruthless methods cause friction with Lieutenant Matthew Casey, a firefighter at the nearby Firehouse 51. Casey had arrived on the scene of a serious car crash where the driver, Voight's son Justin, had been drinking. The resulting arrest would have been a DUI with possible repercussions as the passenger in the other car had been paralyzed from the waist down. Voight had tried various methods to stop Casey from filing the report against Justin, first beginning with bribery (a new television set for the CFD) and escalating to physical threats towards Casey and his then-fiance, Dr. Hallie Thomas. Voight attempted to have Casey injured or killed, but was arrested by Detective Antonio Dawson in a sting.

While in prison he offers Gabriela Dawson information on who shot Antonio, who was working undercover at the time. This was in exchange for a future favor, which Dawson reluctantly accepted. Internal Affairs (I.A.) later released Voight from prison and promoted him to Sergeant of the Intelligence Unit at CPD.

Prior to his arrest in 2012, Voight served in the Chicago PD's Gang Unit for almost 15 years. He has worked with Detective Alvin Olinsky, who later transferred to Intelligence, and Detective Jimmy Shi, who now heads up a deep undercover vice squad in Chinatown. A number of years ago, after the death of Olinsky's partner, Eddie Penland, Voight, Shi and Olinsky took the murderer, Browning, out to the docks and killed him by taking him "for a boat ride."

As a young patrol officer one year on the job, Voight met "the most beautiful college girl in Chicago", and married her six months later. Camille died in 2010 of ovarian cancer, leaving him a widower. Voight's father, Richard, was also a Chicago Police Officer.

Voight has a strained relationship with his son, Justin Voight. This may be due to the fact that his job in CPD was demanding and occupied most of his time. Justin acts out (usually by drinking and driving or fighting in bars) and hangs out with the wrong crowd. More recently, Justin was involved as an accessory to the murder of a rival gang member by his shady friend Joe Catalano. Voight learns from Antonio Justin's involvement was just that of an innocent pawn and allows the case to be buried. Voight then takes Justin out and forces him to enlist in the United States Army to keep him out of trouble. Voight then kills Catalano by drowning him in the river. Later Voight learns that he is going to be a grandfather when he meets Olive, who got pregnant by Justin before he enlisted.

In "An Honest Woman" Voight was beaten and kidnapped, along with Olive, by two criminals. They threatened to kill Olive if he didn't open the safe he has in his basement. Earlier she had run her mouth to an old friend of hers and confessed that Justin had told her about his father’s secret stash. Later her friend went behind her back and betrayed her. The friend ended up telling other people about Voight's money and one of them approached Olive with a knife. He cut her, but not deep enough to actually hurt the baby. Just so she knew he was prepared to cut her child out of her if she didn't help them set up Voight.

While Voight struggles with his relationship with his own son, he has a tendency to help vulnerable young people. He took Erin Lindsay under his wing (and became her legal guardian) when she was a teenager and got her to stay away from drugs. She, in return, became his C.I. and later joined the CPD. More recently, he helped a 13-year-old boy named D'Anthony get out of the gang culture his older cousin forced him into. He later gives D'Anthony's aunt $4,000 to look after his basic needs.

Hank is friends with the 21st District's Desk Sergeant Trudy Platt, and has a decent working relationship with District Commander Ron Perry, who had "six hundred reasons why he didn't want [Voight] to run Intelligence, but one reason why"-because he got results. However, his relationship with Cmdr. Perry's successor, Commander Fischer, is not nearly as amicable.

In "Chicago Crossover" he interrupts an interrogation handled by Nick Amaro and Amanda Rollins, to do his own way of interrogation (beating the suspect to tell what that person knows). Sgt. Benson stops him and threatens to arrest him. During the course of the case, the two of them are able to strike up a friendship.

In "The Three G's" after working on the human trafficking case, he threatens the officer that filed an official complaint against Sean Roman. He offers him financial help to go to a dentist with his financial help or threatens to beat him up.

In "Daydream Believer" he threatens to beat serial killer Greg Yates to death after he kidnaps and murders Nadia Decotis, Intelligence's civilian administrative assistant. When Yates was in holding he relieves the corrections officer of his duty and roughs Yates up, insisting he must feel what his victims went through.

At the end of "There's My Girl" he demotes Kevin Atwater following an IAB investigation after he leaves a soda can with the suspect that led up to his suicide, and promotes Officer Kim Burgess to replace him.

In "Born Into Bad News" he shows his concern for Erin Lindsay when she going back to the same person that she once was.

In "Start Digging" Hank is offered a meritorious promotion to Lieutenant by Commander Emma Crowley and the CPD brass as part of the new Chicago Police Superintendent's reorganization of the department that includes getting officers like him off the streets. However, before Hank could either accept or decline the promotion, his son Justin was assaulted and later died of his injuries, causing Hank to go on a revenge mission against Justin's murderer. He gets the murderer to the silos, makes him dig a hole and then kills him.

In "The Silos" he was brought back to the silos by Cmdr. Crowley and Internal Affairs detectives, to see if they can find they can recover the body and get him to confess. When the body was gone, he was quickly released and went back to duty. Lindsay had moved the body prior to them getting there. 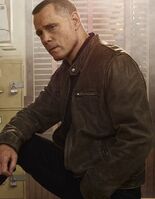 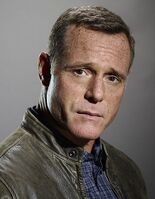 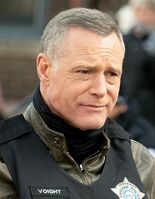