Hana Gibson is a special agent of the Fugitive Task Force on FBI: Most Wanted.

Hana Gibson is a cowboy boot-wearing FBI Analyst from a conservative Dallas family. She is a master of data-mining and social engineering with a sharp, earthy sense of humor. Tough, playful, young in years but an old soul at heart.

After meeting FBI contract hacker Jack Wellman several years before joining her current team, she decided to go on a date. The chemistry wasn't right for Hana, and she decided not to pursue the relationship. Wellman, however, wouldn't let her go. He flooded her with texts and emails, began showing up at her apartment all hours of the day and night, and sent her classic stalker "gifts." She reported his behavior to the Bureau and he was subsequently fired.

Jack reaches out to Hana in Grudge telling her that he can help the team find their cyberstalker if she agrees to meet with him. The meeting is unproductive, and Hana leaves.

Later Hana confronts Wellman in the same coffee shop. She tells him that he is not entitled to anything from her, and that he is not a part of her life, never was, and never will be. She walks away with a small smile on her face while Wellman sits dumbstruck in the background. 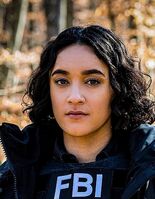 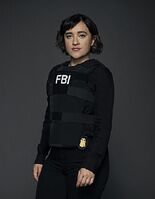 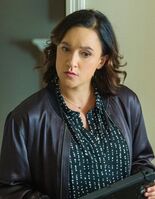